Haroun at the Belgian Pride 2013

I met Haroun this spring during the annual general meeting of çavaria. He was there as a delegate for Why Me? We kept in touch via Facebook and I hope to meet him again at  the Human Rights Conference at the World Outgames. Meanwhile I did this interview with him. My Swahili is dreadful, fortunately he speaks english.

Tell me about yourself

I come from East Africa a state called Tanzania. I was born June 11, 1993. I took ma primary school in Zanaki and  secondary school in Biafra. I didn’t finish my lessons because ma family could not afford to pay the school fees.

I interrupted my studies in 2010 and did not study until now.  About ma hobbies: Modeling I like most of all. I like to wear all kinds of clothing and choose different hairstyles. I hope to be Mister Belgium one day.  I  also like swimming, playing basketball. I am a gay top but I also can be bottom.

You came to Belgium as a refugee because homosexuality is forbidden in your country. What is the exact situation in Tanzania about this?

In Tanzania you can be imprisoned for 14 years when you get caught.  Tanzania is a very religious state. Islamic and christian religion are very powerful. They don’t accept LGBT and they see it as a taboo.  Many people get killed, others get arrested and punished in prison.

How is your situation now here?

Since I came to Belgium I feel so safe and happy because I am free. Not like in Tanzania where I used to hide my homosexuality for my family. There are no clubs for LGBT in my country. Here I can enjoy being with my friends.

I am really thankful and happy since February 14, 2013 when I asked for asylum. I have been helped with food, shelter and finance and medical care. I am happy to be in the procedure for asylum. During this process I have been called for the second interview on April 4 2013. The result was not good so I asked my lawyer to make appeal. Now I am waiting for the answer. I think I will make it and be accepted as a refugee in Belgium.

When I had my first interview I received a leaflet from Why Me and got to know the president of this organization, Alberick (on the right in the picture). I want to thank him for connecting me with other people with the same attitude: Birds with the same wings fly together. I am a member of  ‘Why Me’ now since the first meeting I went to in march 2013.

You sent me video about some discussions in the Tanzanian parliament. What was that about?

In June there was a debate in the parliament about homosexuality. One of the members, known as Wenje from the political party called Chadema was making a speech attacking that another political party, known als CUF is following the liberal view on homosexuality and promote same sex marriage and help LGBT to grant their rights and freedom. The members of parliament did not accept the view of the liberal party. A big debate started. The session was postponed.

Are you going to the Human Rights Conference during the World Out games? What do you expect from it?

Yeah, I will be there. I still have many things to learn. I will be happy to participate.

How can people here in Belgium help you?

I can use some cooperation, that is the best way to achieve my live. 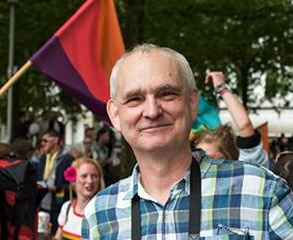